An observation project that is mainly led by the project office is SEEDS (Strategic Explorations of Exoplanets and Disks with Subaru). For exploring the exoplanets and the circumstellar disks which are the parent of the planets, this project mainly uses High Contrast Instrument for the Subaru Next Generation Adaptive Optics (HiCIAO) developed for the Subaru Telescope and 188-Element Adaptive Optics (AO188) which corrects turbulence of atmospheric.
The observations started in October 2009, and make exploration about 500 celestial objects with using the Subaru Telescope at 120 nights for five years. From this, we explore about “our Solar System is universal or not” by direct observation method. Also, this project cooperates with not only domestic universities but also with many foreign researchers. It is the international project consisted by more than 100 people centered on Japan. 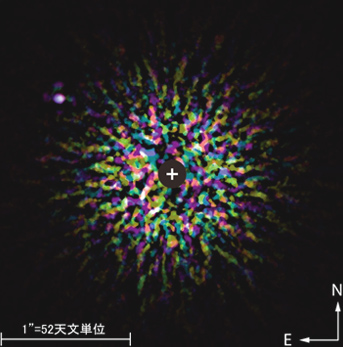 Right Image: A false-color, near-infrared image of the Kappa And system.

Image processing removed the light from the host star, which lies behind the mask (a software-generated, dark disk) at the center of the square. The colored speckles represent starlight left over after removal of light from the host star. Separated by about 55 Astronomical Units from its host star, the super-Jupiter, Kappa And b (upper left), resides at a distance about 1.8 times greater than Neptune's orbital separation from the Sun. (from Subaru Telescope release) 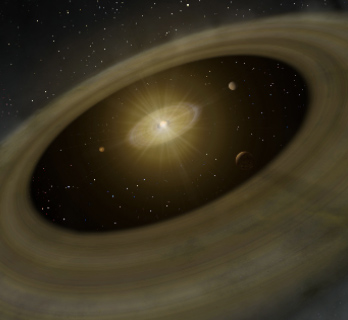 There are disks inside and outside, and there is a large gap between them. In the gap, some newborn planets orbits around. There is a possibility to exist this large gap by the gravitational effects of these planets.