The NAOJ ESP Project Office relates to the observation of THREE of them. 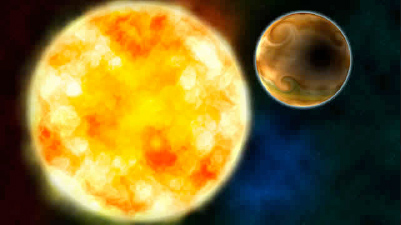 The left big star is a central star, and the right one is an extrasolar planet

What is the Extrasolar Planet (Exoplanet)?

We call planets orbiting stars outside the Solar System extrasolar planets (exoplanets).
The first unequivocal exoplanet was found around the 51st star of Constellation Pegasus in 1995. The mass of it was about half of Jupiter, and it takes only about four days for orbiting once around the central star. The planet is a "Hot Jupiter" because it is close to the central star and the surface temperature is over 1000 degrees.
In addition to the Hot Jupiters, there are many specific exoplanets that are totally not similar to any planets in Solar System, such as “Eccentric Planets” which orbit around the star elliptically, and “Super-Earths” whose size is several times larger than the Earth. These unique exoplanets show us various figures of our "new world".
The direct observation encouraged by this project office has also discovered the exoplanets which are different from the planets in Solar System. These are giant planets several times larger than Jupiter in the distance (farther than the distance of Neptune). We call them "wide-orbit giant planets".

Meaning of the Exoplanets Detection

In this Universe, are we, humans, alone? Or, are there any second Earths that harbor life?
This is a question that not only astronomers but also many people have widely interest. In fact, the exploration of the other planets and life except Earth has been a human dream since a philosophical disputation in Greek time. Then, from around the 1930s, people have made many attempts at the exploration of exoplanets, but every single one of these attempts was finished with failure. Various aliens were drawn with wild imagination in SF novels and movies. However, in the scientific world, it would be able to say that the pessimistic view to the extraterrestrial life became dominantly in reverse.
Since 1970s, the observational technology has been improved spectacularly, and the planet hunting for investigating exoplanets which are stated as mother of life almost reaches to the success. It takes about eight minutes from the Sun to the Earth with the light speed, but it takes about four years to the nearest star. Comparing to the eight planets in Solar System, the celestial object is far away. Detection of such a far exoplanets requires much higher performance than the ordinary astronomical observation method. Especially, spectroscopic observations that detect the stellar wobble due to the planet's orbital motion has been reached at first to the level possible to detect the planet even as it is indirect observational method. Finally, by the discovering the certain exoplanet in 1995, the Pandora's box related to the research of life in the Universe was opened.
After that, and until now (January 2013), more than 3500 exoplanets including strong candidates were found. It is possible to approach to the matter of extraterrestrial life an scientific way. In particular, the results of the satellite Kepler that was launched in 2009 are remarkable. There are over 2700 candidate planets that were captured by satellite Kepler as the images of the planet's shadow by indirect way. The Earth size planets are also discovered.
Now, it is also become possible to capture the exoplanets by direct method, not only to detect these by indirect way. However, the direct method is also difficult in technologically compared to indirect method, then the examples are very limited. Like this, “taking image of the second Jupiter directly and investigating it” is the one of the main missions of this project.

About the Project Office 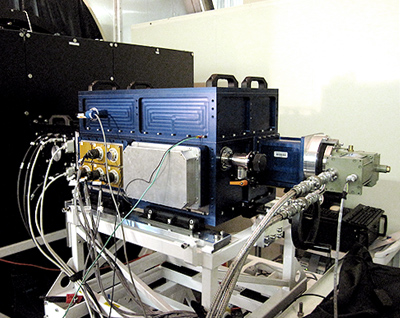 High Contrast Instrument for the next generation Adaptive
Optics (HiCIAO), mounted on the Subaru Telescope.

Extrasolar Planet Detection Project Office has developed original instrument (HiCIAO) for the Subaru Telescope in Hawaii. And, we have done with it the direct observations of the faint exoplanets and disks (circumstellar disks) around bright central stars. By these observations (high contrast observations), we investigate giant planets and circumstellar disks where planets are born.
Also, we are developing InfraRed Doppler instrument (IRD), and we aim to detect “Second Earths” near us. This would make it possible to find out terrestrial planets that is near the Sun around less massive stars even though the Kepler mission could not find.
Moreover, we are going to develop a high contrast exoplanet instruments for TMT (Thirty Meter Telescope) or future space telescope projects (WFIRST or TPF), and promote the research for reaching a step that is “wanting life on the Second Earth”.
Through like these research and development, we try to answer the question that “the humans are special existence in the Universe” or “there are any Second Earths which giving life”.